After spending a whole day peeling back the Night Film tentacles from around my head, 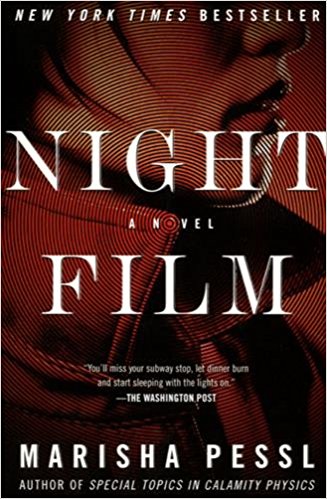 I can gratefully report that I’m almost back to my normal self after reading this one.

Let me correct the last part of that sentence. One does not simply read Night Film. Before you open this book, take a moment to prepare yourself.

You are about to enter into a multi-media, multi-sensory whole body experience. It is not unlike having a black magic spell cast upon your coconut. You will know nothing but Night Film. Think of nothing but Night Film. If you do sleep, your dreams will be the creepy, dark type. You start to feel you are being watched. You will dig out your long lost pepper spray and start carrying it with you on walks. You will find yourself googling Stanislas Cordova. Was he actually given the 1980 Oscar for Best Director by the lovely Goldie Hawn?

YES! YOU KNOW IT’S FICTIONAL, BUT YOUR MIND WON’T ACCEPT THE FACT. It is presented in such a realistic manner with authentic photos, videos, and articles from Vanity Fair,  The Rolling Stone, Time Magazine and The New York Times. There are police reports, artifacts, and interview transcriptions to help with your investigation. It’s one thing to read about a haunting photo, but to have that photo to study for yourself? Genius.

PLOT SUMMARY: The daughter of a reclusive horror-film director Stanislas Cordova is found dead, and fallen journalist Scott McGrath falls into a maddening wormhole of trying to uncover the truth behind the girl’s murder. Night Film gets darker and more twisted the deeper McGrath ventures into Cordova’s world—the man hasn’t been seen in public in 30 years, and his films are so horrifying that it’s believed the person who created them must be seriously disturbed as well.

The book is bone-chilling scary, but not in an obvious slasher way. The author creates and instills just enough fear to make your imagination run away with a suitcase and never come back. This is a major theme of Night Film: the power of imagination and the human mind which seeks to bridge the gap between the two. When faced with the unknown, we tend to look for answers in religion or just plain old superstitions. Can our fears all be explained in concrete, provable terms? Does evil always have to have a reason to exist? Pessl doesn’t give us all the answers and that’s why every person that reads Night Film will take away something different. I love that.

A genre-bending book, I have no idea how it could be classified justly. I would recommend it first and foremost just for the murder investigation at the heart of the plot. From the prologue until the bitter end, discovering what really happened to Ashley Cordova will keep you turning the pages all night. Now, add in the multi-media presentation because that greatly enhances the story and experience. This technique is unique without being gimmicky, and is truly original. Next, sprinkle in some Stephen King horror elements and just a touch of the supernatural–voila!  You have Night Film.

This is not a perfect book, much as I want all my favorites to be. It is a bit too long and the ending is not as satisfying as it could be. But, these minor points are easily overcome by Pessl’s fabulous writing style. She reminds me of my two spirit animals, Gillian Flynn and Tana French, writing in a fluid, descriptive manner. Her characters are fleshed out, the plot is addictive and the mood she sets? Wow. Dark, haunting, sobering.

I began this book on audio. I quickly realized I needed to see written words, since this is a complex GIANT novel. It was only then that I understood how much I would have missed by sticking only with audio! I hadn’t read a ton of reviews and I didn’t even know about the multi-media part of the book. Trust me! This is where the magic happens! You feel like you are right there on the case with Scott McGrath, studying clues and helping to solve the twisted Cordova mystery.

The Kindle multi-media version is amazing and when coupled with the astonishingly good audio, well, you can understand why I had to recover a day when I finished.  If you are open to a bit of horror in your psychologically twisty mysteries, this is the book for you. I can’t recommend it enough!

If you’re here, perhaps you know the basics. I’m a New York Times bestselling author. My first novel, Special Topics in Calamity Physics, was named one of the ten best books of the year by the New York Times. My second book, Night Film, was named a best book by NPR, Cosmopolitan and Bookpage, and is currently in development with Chernin Entertainment at 20th Century Fox. My books have been published in over twenty-five languages.

I grew up in Asheville, North Carolina and currently live with my family in New York City. I attended Northwestern University, where I majored in Film, then transferred to Barnard College where I majored in English Literature with a minor in Playwriting.

After graduating I was hired by PricewaterhouseCoopers as a financial consultant. In my tiny cubicle on the fifty-second floor of the Fox News Building, when my boss believed I was hard at work on PowerPoint presentations, I was actually searching the company database for cool character names for the new novel I was writing called The Anatomy of Butterflies, later retitled, Memoir of an American Girl. Two years later, after moving to London, I finished the book, which came to be known as Special Topics in Calamity Physics.

My favorite part of this job is the creation—building a universe from scratch, populating the planet with characters, landmarks, and hidden tunnels. I used to plot out my books meticulously but now I start with an evocative premise and see where it leads. I’m often asked to explain what my novels are about, but I find it difficult to answer. Writing is a meditation, a brutal trek through the wilderness, and a magic trick all at once.

I’m in awe of fearless people who build companies and outsiders who design worlds, anyone who isn’t afraid to break the mold or stand alone. People who never stop seeking the truth to the mysteries of their lives with courage, humor, and a healthy respect for murk.

I love anyone who takes time out of their hectic lives to read, so I look forward to meeting you in bookstores around the world.