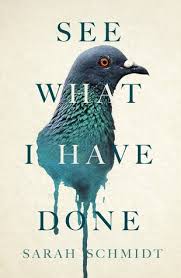 Sarah Schmidt is a brilliant, exciting new author hailing from Australia. Her debut novel, SEE WHAT I HAVE DONE, is a clever reimagining of a well-known American murder mystery. (Not only that, but what about that gorgeous cover? I gotta thing for creepy looking bird covers.)

These are the facts. But there are more layers in this horror story than the dust that has built up on the Borden parlor rug. The author lures readers like a witch’s bony finger beckoning, inviting you to a front row seat in this dysfunctional, hateful family psychodrama. The writing is cryptic, creepy, and dreamy. The disturbed childish thoughts endlessly spit out of Lizzie’s mind. It is a suffocating book with no escape.

While the writing is of the highest quality, the content is so gruesome and macabre, I can only recommend SEE WHAT I HAVE DONE with reservations. This is not for the namby-pamby reader. I consider myself somewhat stouthearted, but I turned absolutely green around the gills while reading this book with my morning oatmeal.  I REPEAT: Do not eat and read this book at the same time unless you have a cast iron stomach. I don’t have a total count on how many times the words blood, vomit, hair, congealed or thick fluids is used, but trust me, it is up there.

Oh and by the way, prepare yourself to find unpleasant body odors described in detail and often. You get the idea, now proceed with caution, it’s an excellent story.

AMAZON link See What I Have Done